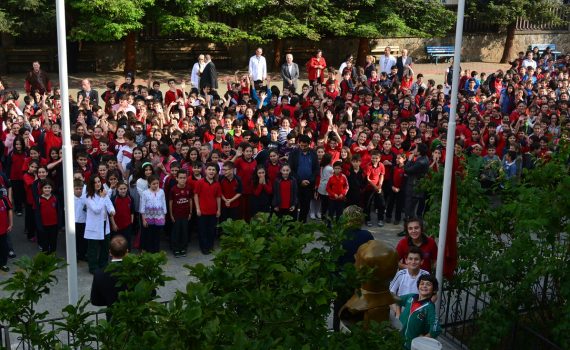 In May this year we had had the opportunity to participate in the 9-day exchange titled “Cultures Through Young” Eyes” in Trabzon in Turkey. We participated in a total group of35 people from seven countries,namely Slovakia, Slovenia, Romania, Spain, Bulgaria, Lithuania and of course the participantsfrom Turkey.

We were staying in the hotel Demirgrand, which is located near the Black Sea. Program was focused mainly on cultural themes and related activities. The first three nights it was about Intercultutural evenings where each country presented their food, alcohol,and typical national dances. In these evenings we have experienced a lot of fun and also we are also more closer to other cultures and traditional customs.

The most interesting activity for me was the exchange of treasure hunting. During this activity, we were divided into groups, each with a leader of the Turkish one. At the beginning we were given a schedule of the tasks that had to be answered. It was interesting because some objects or places that we had the task to visit were written in Turkish, so we had our work with a leader in finding these places and objects.

We had also a city tour, where we were accompanied by participants from Turkey, who knew the city the best. We have visited the university. It was a huge school complex consisting of a plurality of faculties located in one place. One day we have spent with children in school.It was an indescribable experience that we enjoyed,not just us but also the children. They were extremely thrilled and from some of us also asked for signatures 😀 Children have spent the whole noon with fun in the performance of activities and games that we have received them.

Our stay in Turkey I can value only in positive way. On the exchange itself, we had the opportunity to know diverse cultures and their habits. We have collected a number of new contacts, friends and memories. Exploring the city itself was also extremely interesting and despite the bad weather we have spent wonderful time with super people 🙂