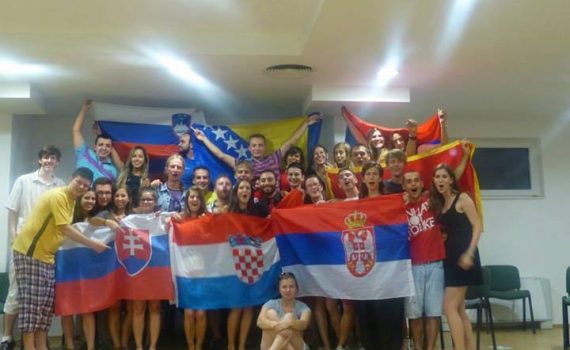 We published few days ago the article with the experiences and benefits for Slovak participants, who had a chance to take a part in our youth exchange which was held at the end of August in Mostar, Bosnia and Herzegovina.;But what are the opinions of young people from Serbia, Bosnia and Herzegovina, Slovenia or Czech Republic?

The first thing that attracted me to applying to this youth exchange is the concept itself; where we would talking about bridging differences and problems in Mostar, the city known for its national/religious conflicts, but also for its wonderful bridge which devides but also joins the two sides and its people. I found it appropreate for my first experience with youth activism. Meeting such laidback, inspiring and active people was an eyeopener for me, since I was convinced that my fellow citizens of Balkan countries were pretty hopeless regarding the issues of tolerance and coexistence, finding it irrelevant. Also, I am glad that this youth exchange was based on exchange of experiences and team building and not only on theoretical workshops. That way I had the chance to talk to my peers from Slovakia and Czech republic about the split that happened to their countries, and also how other youth from the Balkans are bridging the situation after the War. And of course, we did not talk only about the political sitations in our countries, but also about our lives in general. Now, I am so pleased to say that I have met people I will charish for a long time in my life. I would like to thank ADEL Association, NGO Youthpower,; Belmin Debelac and Lenka Curillova on this beautiful experience, my first youth exchange, since my more experienced peers said it was a blessing to have such a positive experience as the first. Merjem, Bosnia and Herzegovina

“I got back from Mostar two days ago and I’m still unpacking my experience. I loved getting to know young people from across the region. The informal conversations we had over coffee and meals are some of my favorite memories from this youth and exchange. I should also add that Mostar was a perfect choice for a host-city of this seminar. It was intriguing to learn about the city’s past, its current divisive issues, but also discuss how to overcome the problems that exist. I hope for many more exchanges like these in the future!” Bojan, Serbia

“This youth exchange gave us the opportunity to gain new experiences, meet new friends and learn informal lessons from the recent history of the Western Balkans. All of the things mentioned may be present at most youth exchanges but the location – Balkans, Bosnia and Herzegovina, Mostar – meant a unique flavour added to our whole meeting. I personally felt it was very special to me, I will definitely want to come back another time and not just once. All the Czech participants agreed they were happy they took part in it, learned many new things about the Western Balkans countries and enjoyed the presence of the group of very nice Slovak participants. For the Czech participants it was interesting to discover how surprisingly close we still feel Slovaks are to us:)” Martina, Czech Republic

“My reasons for joining the seminar: To me, it seemed like a great idea, to join people from ex-Czechoslovakia and especially ex-Yugoslavia together, as we all know about the bloody 90’s and many horrible stereotypes that people of different republics created for each other. It is about time to break them already. But I am also very glad that we had people from Czech Republic and Slovakia, because sometimes we could observe their way of communication, as well as they could observe us, and then we discussed it. Another very useful ”feature” of international seminars is international networking. Especially as all republics within both ex-communist/socialist countries still keep a lot of trading and connecting, we were able to get new friendships which will be useful in the future. The only thing I didn’t like was the time, as it flies so fast when you’re having fun.” Leon, Slovenia