The ancient Greeks believed that politics meant that each citizen individually cares for the city’s common matters. A law in ancient Greece obliged every citizen to join a political party when it came to civil conflicts. Whoever chose to remain neutral, he would lose his civil rights, as he would be considered useless. This is not the case today, as people and especially young people, are moving away from politics and participation in the society, and they can no longer be considered as active citizens. Lack of trust in politics and the people being “not interested in politics” were the two main reasons why people absented from the EP elections of 2014, according to the 2014 post-election survey of the European Commission’s DG Communication. Besides, people do not act collectively anymore in order to solve the problems that the society is facing; something that gives grounds to political indifference and individualism. Therefore, YEU Cyprus has set as its target to increase and promote youth participation in the society and to strengthen democratic life.

With this project, we wanted to show young people and policy makers that there are a lot of ways in participatory democracy; and explain how we, as active citizens, can change the system with a bottom-up approach. This way, we wanted to stimulate debate about the obstacles that prevent people from fully using these rights and encourage them to participate.

Active citizenship implies being active towards the political and social life, but also it implies democracy which is realized by people’s participation. It also means having confidence in political values and being able to criticize politics and politicians. This highlights the importance of continuing to educate young people in being included and participating in the social and political framework of the society.

Therefore, the objective of this project was to foster active citizenship and encourage civic participation at local, national and EU level. Especially, the project aims to embolden and inspire young people in their ability to participate actively in society in line with the provisions of the Lisbon Treaty; and to stimulate the development of participatory democracy of young people.

The final objective was to produce a policy paper in order to forward it to the policy makers at national and European level with the view to be used for future policy making in the field of participatory democracy, active citizenship and youth. 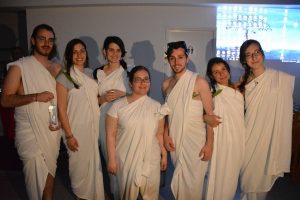