Feedback from one participant:

But after the first day all worries faded away. What really satisfied me was the fact that it was informal, it wasn’t about looking at presentations 24/7. Despite the fact that that organization was a little bit messy sometimes, but that’s alright, the most important thing was to enjoy and learn.

I’ve met a lot of great people from Bulgary, Italy, Spain and from our little Slovakia, of course nobody knew where it  (at least we opened their eyes).?

In this project we have ruined the barriers of fear of talking in foreign language, sometimes by gestures, other times by spanish or english language and there were nights when we expressed it ny dancing and smiling. I want to thank this project for showing me that I don’t have to be scared of living in other country, because we are all equal and we are all humans.

P.S. We made it, we blended together.”

The exchange was focused on developing the social skills necessary to face living in another country, to know and learn a language and to understand the culture of the surrounding environment.

Nowadays it is true that the English language is the most common language of the European Union. The globalization requires the knowledge of other languages than our own mother tongue. Either for the purpose of developing our daily activities as to be more competent in the labor market. We are conscious that not everybody has the same opportunities or skills to learn a new language, either for lack of resources or motivation. For that reason the aim of the Youth Exchange “Let ́s Blend Together” was to develop and improve the communicative, social and cultural skills of young people through different tools such as the non formal learning methods, intuition, creativity and empirical method.

The training was given in a mixture of simple, easy-to-understand Spanish and English. The idea was to let participants, all coming from 4 different countries, promoting their own native languages by teaching the basics for conversation. We wanted to spread the idea that differences have to create links between people, not barriers! 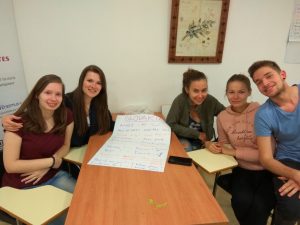