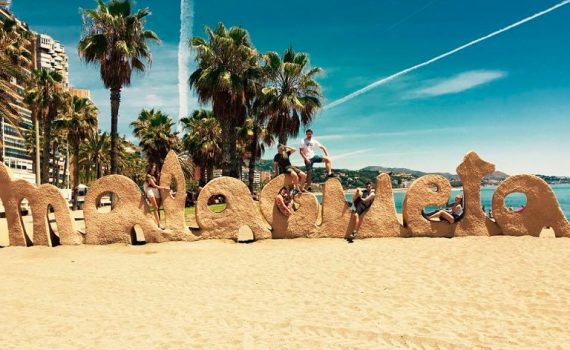 We attended a youth exchange, named UNSTOPABLE WORLD in days from 1. to 10. May. It took a place in a Spain town, called Puente Genil. The topic of the exchange was to gain knowledge from the field of migration and helping the migrants to fit in the society.

Despite the fact that the exchange started on a 1. May, the adventure had begun a little bit earlier for some of us. Our flight from Vienna was planned to 5:30 in the morning. It was a sure thing from a very first moment that we are going to be a great team. There was no chance to get bored in following 10 days. After the short introduction, we started to play cards together, to make the time fly faster. We had continued with it for the rest of the exchange. Later on, also the Nigerian, Pakistani and an Estonian joined our card-club.

After approximately 3 hours in a plane, we arrived to the sunny Málaga. We took the first tube to the centre, where from we were supposed to get to our final destination, Puente Genil. The next train was in 5 hours, as we found out at the train station, so we had enough time to walk around a city. However, after a few hours, we had been already in our residence in Puente Genil as a first group arrived. First activities had been planned to evening hours, which gave as a little time again, to explore the streets of our temporary home.

We’ve built quite a strong addiction on a local ice-cream, during this little walk.

After all the participants from different countries came and accommodate themselves, first Ice-breaking activities have started. It was an official beginning of our exchange.   The activities were aimed to better understanding of current problems related to the migration. Speaking for whole Slovak group, these activities hit their point and opened our eyes and minds. However, it was not just about migration. Our communication skills went much better at the end of the exchange, compare it to the beginning. We also learned hove to solve various problems, think logically, present our ideas and express ourselves properly.

We did not forget to have fun, while educating ourselves, of course! Every evening, we went to the shared Livingroom to meet with the others. Everything lived there. Mostly, it was due to the culture nights, which started the fun perfectly. I dare myself to proudly claim, that the Slovak one was the best of them. Traditional sweets and drinks, such as Horalky, Tyčinky, Korbáčiky(cheese product), Borovička (alcoholic drink) or Tatratea (alcoholic drink with perfect design) could not be omitted.

Two trips to the historical Córodba and beloved Málaga, which we visited before, was also included in the exchange program. We had spent a little time there, enough to see all the historical monuments and places, taste all the traditional food, visited the shopping malls and to sit for a coffee.

Exchange reached its end so soon, but it had given me much more, than I would expect. I never thought, that man can learn so much about culture, its complications, to explore beautiful Spanish cities, gain new information, and the most important of all, to meet such a great people, who I will never forget.

By this short article, I would like to say thanks in the name of a whole group that attended this exchange. Thank you ADEL, for making it able for us to experience so many indescribable adventures. We want to say thank you for your perfect communication and a non-stop help in case of the need.  And for those, who still did not make the decision to apply for some project, I want to send a message. I have attended two exchanges through ADEL. In Cyprus and Spain. It were the best days of my life. So hurry up to apply!