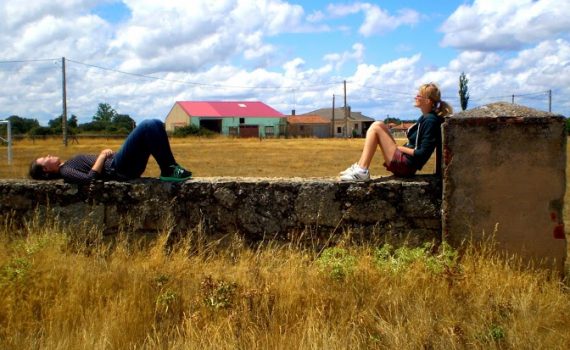 ….and we ended up in the country of temperament, bullfightining and flamenco – Spain. After first discussions with participants from Estonia, Latvia, Hungary, Italy and Spain, sitting on the floor of the Madrid airport, we were enthusiastic from new experiences that were waiting for us during ECOOCIO Youth Exchange. Our second home for nine days became town Mugade Sayago, the yellow grass growing from dry, cracked ground, matched the colours on the flag of the country in which we arrived.

After welcoming by charming Carlos, eccentric Jonas, empathetic Kitos and friendly Manuel – some of the best organizers which we could ask for. We were divided into rooms and then 48 hungry stomachs were sitting down at the dining room table in order to gain energy for evening activities. Once finally started sunset (approximately at 9:30 p.m.), we were divided into groups and assigned song for which was necessary to make a choreography. And few minutes later, we swayed to the rhythm of songs like Mamma Mia, Wrecking Ball, Thriller, Y.M.C.A, Single Ladies and others. We proved not only our talent or antitalent on the dance floor, but also a sense of humor, because the aim of this activity was mainly to have a fun. We finished successful first night of the project in “never-forget-you” bar.

Whole project was carried out in such a friendly and relaxed spirit. How our days looked like? From 9 to 10 we had breakfast and after it began a rich program until the evening. The first were ice breaker games which were organized every day by a different country. It was always different game, which was during the first days focused on getting-know each other but also for awakening and warming up. After it, followed various workshops, debates, or even some lecture either about the evironment or Erasmus+ Programme. On the first day we made painted bird boxes, which we later hanged on the trees. Later we proposed posters and leaflets about our project, cleaning up the environment, or even filming “educational” video on recycling and protecting our only planet.

During the lunch we tried typical Spanish dishes and their national cuisine. We got, for example, paella, tortilla or sout from seafood. Of course, typical for Spain, we had also siesta 🙂 At the beginning, we used it for exploring the picturesque village of Muga de Sayago, but during later days, we looked forward for a sweet afternoon sleep. Indeed, I would welcome such a siesta at home! Every night we had memorable program in the form of national night, when participants of Ecoocio project were discovering the different culture, food, drinks and dancing. Estonia, Hungary, Spain, Latvia, Italian and Slovak – each has something special.

And we – Slovak women, voluntarily experienced Easter in summer : D I think there will be no surprise when I say that every day we went to check how it looks in a cozy little pub which became our favourite. As noted our main organizer “… in every Spanish village you will find a church and a pub!” Well, isnt it similiar in Slovakia?

However, we were not just in Muga de Sayago, but took a trip! We went swimming twice, we were hiking in a national park! The canyon was the border between Spain and Portugal and we laughed that we are going to jump, swim across, take selfie from Portugal and quickly join to the others 🙂

We went kayaking and then to the beautiful historic city of Salamanca …we got difficult tasks such as to find on the monuments astronaut or frog and who find the frog, he was supposed to have successful life. I will tell you later if it’s true 🙂 We handed out leaflets designed by us to people on the square and presented our project.

Slowly but surely our Spanish adventure ended. On the last day we were all staying in a circle with our eyes closed, Manuel and Jonas something prepared  and during slow music mentioned what happened during the project. When we were instructed to open our eyes, we saw white paper and markers on the ground. We should trace our hands and to write something. It was so touching moment, that even tear came out. I think I can say that I was not the only one….